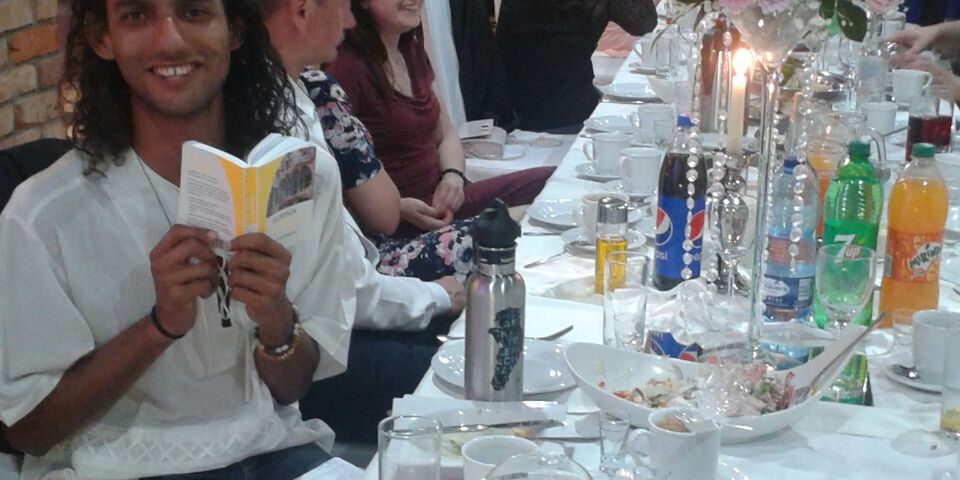 I am writing to you yet another letter. It must be sunset time on your roof top in Mexico City because it is sunrise here in my garden.

Today I woke up just in time to see the magnificent sky before it clouded over.

I used to have a Scottish friend who was always telling me:

"The sky is beautiful at every sunrise even in the worst of cloudy days in Britain". I was never awake that early during my life in the UK (or 'awake' in general) to witness it, but now I can say that yes, it is true!

Anyway, we have our own, big and beautiful strawberries. Snails and not only them, are having a feast. But I will write about it later.

Now I would like to tell you about the recent wedding by the Baltic Sea.

First of all, that northern region of Poland is called Kaszuby and it is quite different from Lower Silesia. It starts from the city called Hel on a famous peninsula of Polish 'riviera'. They proudly hold a sign which states: "Hel- the beginning of Poland". It is really beautiful there.

William was joking: "we are going to HELL?!" and later he really made me laugh by saying:

"the Catholic church was lying to me for years, all this time they were saying that in hell is really hot and here I am, feeling cold". Well, it is Poland and it is June, it is not to be mistaken with Cancun even in April. Baltic Sea is not Caribbean.

The tradition of the region does not happen in the whole lot of Poland. General rule is that anyone can come to the house of the bride and perform some glass breaking for the future good luck of the couple. Fortunately visitors bring their own bottles and jars.

It is not known how many people will turn up for this part so my friend prepared a lot of food just in case. William and I helped with these preparations, making 'koreczki'.

Paprika, kabanosy ,cheese, mushrooms and our famous, so hard to get in Mexico: gherkins!

William was helping with preparations without touching the sausages.

It was a nice evening. A lot of glass was broken by friends, family, work colleagues and people from nearby villages. Sudden appearance of a live orchestra was a real bonus.

Party finished around 2 am and some of us (among them William Ignacio) had a doubting pleasure of collecting 4 buckets of broken glass.

The next day- Saturday, was the actual wedding. Ceremony took part in one of the local Catholic churches. Afterwards we drove to Krokowa, where the wedding party took place.

During the 2012 UEFA Euro which took place in Poland, Spanish football team stayed in this polish community and Shakira, being the girlfriend of Gerard Pique (how about this, almost as if I knew who I am talking about) was eating at the very same restaurant.

They didn't tell me Shakira danced there too, so I'll say, until now I am the official dancing queen of  'Kasztanowy Gościniec'.

Of course I am joking.

There was a life band playing all the Polish wedding songs, but not only in Polish. To Williams biggest surprise, suddenly during the party he could hear Spanish 'Labamba',

-"Sang as by a native" William's quotation.

I am so used to that song being played here, I wouldn't even notice, but William was completely amazed. Told me that this doesn't happen in Central America, you will not hear  during a wedding party a song sang in Polish.

Well maybe it is better our music is not popular there. There is this one song and they play it here especially on weddings, called 'Mój piękny panie'. This is the saddest song ever.

The girl is getting married and writing a letter to another guy telling him she doesn't love her husband to be.

And they are playing it on most of the weddings.I could never understand WHY?

For sure when I get married this song is forbidden.

Anyway, William's Polish is getting scary good! Absolutely everyone was amazed with his level. He really can communicate already. Plus he must be the only guy so far, who attended a wedding party with his notebook and a dictionary.

I think to other guests, at the same table as us, at first we probably appeared as: atypical? antisocial? annoying maybe? Not so much because of the dictionary or refusing to drink vodka, also I never took my jacket off so not for the hairy armpit.

More because of our eating system. Me, still following Ramadan so not eating or drinking absolutely anything until sunset (after 9 pm), and William eating all the decorations made of greens and sprouts, pushing away meat and smelling absolutely everything just in case it has traces of butter.

At first the looks of our table companions were full of disbelief mixed with suspicion and surprise, but after we got talking, it turned out that we can all be good friends!

It was such a great night! There were many beautiful moments. I was dancing with men and women there to share the happiness of being alive and healthy. It was amazing to dance with my friend's little daughter, whose trust I had to recover after she hadn't seen me for two years.

But the most inspiring moment for me happened at the dawn.

The live band started to play 'Kiedy ranne wstaja zorze', it is a morning song. Says that as soon as the dawn breaks, the sea as well as the earth and all the elements are praising God. And so does a Man who received God's countless blessings. It was the first wedding which I attended so far, where the orchestra played that! I can not describe how amazing it was to witness it.

My dream is for every wedding party to finish singing a praising song to God at the dawn.

And to start with planting a tree. Just imagine, if instead of giving dead flowers to the newlyweds, the guests would plant trees instead. Doesn't matter where, if the couple doesn't have their own land, it can happen by the road somewhere. They can visit

this tree every year on their anniversary, and see how it is growing, wouldn't it be beautiful?

I have finished reading the whole series of  Anastasia books and this idea of planting trees on the weddings is one of her influences.

As well as planting a tree in a flower pot until you have your own land, did you do it yet?

Actually, one of the first things I did this year in Poland was planting a xmas tree. And it is a special one, I will tell you a story related to it next time.