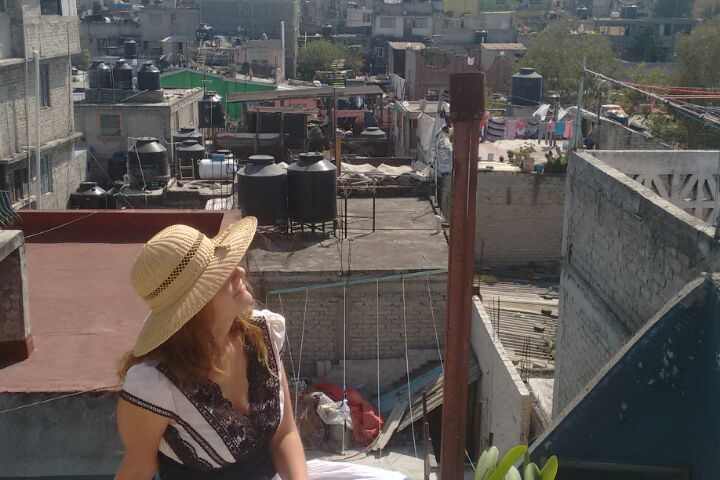 Hope this finds you well, how is the night sky over Mexico City nowadays?

Since, as you well know in this live I was born Polish, BUT:

To tell you the truth, many more times have I been to worldwide capitals than I have been to the capitol of my own country.

It is because of William's dream of exploring 'Polska' that I went again to visit Warsaw- the political and business center of Poland.

I want to tell you more about our time there and compare Warsaw to Mexico City.

As you live in one of the biggest cities of the world, you know exactly what the city life is like.

I've spent a fair amount of my life traveling in Europe and around the world. I've been on hundreds of buses, trains and planes in dozens of countries and cities.

Definitely, the entertainment and trade that happens on the buses in Central America is something that I haven't seen before or after.

But now I want to tell you about a recent trip and the differences I have noticed between our capitol and Mexico City.

For sure there are no dogs living on the tops of Warsaw's buildings. Or at least I didn't see any during our stay. Not like in Mexico City, where almost every roof in Coyoacan has its residents.

I also didn't sleep on the roof in Warsaw, that only happened in Mexico City.

Almost all of your houses have flat roofs, what gives you more living space. Here it is not common to be able to live on the roof, our roofs are sloping. I think it is because of the snow flow during winters here.

Of course the visible difference on the streets is in what people look like. Here we have more people with lighter skin and blond hair, blue or green eyes, but exactly as in Mexico City most people in Warsaw cover themselves with clothes made from polyester, one of the top toxic fabrics.

The plague of chain stores and restaurants is what these two cities have in common too,

only you have moor street food and Mexicans like their food spicy, unlike us.

William makes fun of me and says that in Poland we put 'picante' label on the food when it has black pepper in it.

Food here is nothing like your brother likes, eating raw chili, his face all red, sneezing, tears

running down his cheeks, but still saying:

In my opinion if you don't want to eat from chain plague, good places to eat in Warszawa are so called Milk Bars. Here you can still get traditional food and a fruit compote too. Not like in other places, where sometimes you can only get sugary-based, imperialist drinks from our beloved, omnipresent- red and white. Yes, we suffer from her too!

"Western imperialism is luring you with Coca Cola". That was one of the slogans when Poland was a non-sovereign state. Now we are “FREE” and Poles, after having spent more than one third of each day of their precious Life time making money, are standing in lines- in supermarkets queuing to spend earned coins on poisoned spring water.

Clearly the direct and subliminal advertising is doing its job on both continents.

Sadly Warsaw residents too are unknowingly supporting the mass destruction of water sources.

Moving on, in both cities the main form of transportation are the underground trains.

For William it was first time on an underground train. It is not my daily bread too, thank God, but I know the metro from many countries.

Here I did not see old ladies selling single cigarettes by the entrance to the underground station, not to mention a lighter on a leash like in your city.

Do you remember how surprised I was seeing all the vendors, peddlers and musicians during our commuting time in Mexico City? It is because this is so uncommon for Europeans.

In Warsaw, unlike in Mexico City, there is no entertainment in forms of suddenly appearing musicians or food sellers on the trains. It is not common here for people to sing, offer their own CD's, homemade 'medicines' or other inventions.

Just as well I am not used to seeing illustrations on underground layout, so of course the drawings of stations images in Mexico City attracted my attention.

I remember many guys performing during our travels in Mexico City. However, one of the most memorable moments related to musicians, was actually on the bus in Cancun.

It was the same night that you were flying from Mexico City to meet me there.

I wanted to tell you this then, but once we met I got carried away. So let me tell you now.

William and I were coming back to our newly made friends' house, from our day trip to the beach.

It was in the evening. In this already astonishingly beautiful moment of travelling along the coast during the sun set, a young guy with a guitar suddenly appeared on the bus.

Not only did he start to play one of my favorite songs in Spanish, he played exactly the song which I had in my head at that moment. Nacha Pop - 'Lucha de gigantes'.

Almost as if he was reading my mind.

I can't remember if I gave any money to the guy. William tells me that I did. I knew it was our last night in Mexico. We didn't have many pesos left, already spending money which I had borrowed from friends in England. We had a long journey to Europe ahead of us. I might have been lost, worrying about 'our future' and I might have hesitated to part with cash.

I can't remember how much I gave him, but if I could go back in time, I would have given him more for sure.

Just thinking back on this moment brings tears to my eyes. It was one of the best bus journeys of my life. Young, beautiful and healthy. Positively exhausted after a long day by the ocean.

Wet bikini under my flowery, summer dress, my body covered with sand and my face shining in red shades of sunset. High on Life and music.

Ok. This letter was supposed to be about Warszawa and Mexico City. What else is there to say?

In my experience, all the European capitals, more or less, have the same to offer- the so-called history and culture.

There will always be some kind of a castle, cathedral, museum or another old building to see, if you are into these things. William gets excited about every castle that he sees here in Poland, since castles are not common in Costa Rica. He loves cathedrals too, but only for their architecture.

My point of view concerning historical buildings and sites seems to be constant in any city I go to.

It is not that I can not appreciate its beauty, it is just that every time I see a huge, old building, especially if it is a church or a cathedral, I ask myself the same question.

It is the same question I asked you in front of your Metropolitan Cathedral on Plaza de la Constitución in Mexico City, where we spread my Flying Carpet and you fed me your amazing tomatoes.

Every time I stand in front of a 'magnificent' building I always want to know:

-WHO spent their precious time of Life sweating there, building it? How many generations built it? Were they slaves? I am not interested in what the name of the 'founder' was and how old the stones are nor am I interested in the building techniques.

Anyway, as you know I have found answers. For example an 85-year-old, friend of my grandmother, has told me about her mother, a woman who had to work for free on the fields belonging to the Catholic church. The same mother died young and her family was told by the priest to sell a cow to pay for her funeral. My grandmother's friend was still a child then and had to find work to pay for her own maintenance. That's why I can not admire cathedrals so much!

Coming back to writing about Warsaw's trip. I will not put here stuff, which you can easily “Google”. For anyone coming to visit, I would strongly advise them to use a free walking tour.

As the name says, you can get a free walking tour with these guys. Not only in Warsaw but in major cities of Poland and Europe. On the free walking tour you can learn a lot about Warsaw during the Second World War, Jewish Warsaw or Communist Warsaw. William and I did the historic centre walk. I recommend it.

Thanks to you and your family...I don't even know if there exists a free walking tour of Mexico City?

I didn't need it!

Warsaw is special because the city was almost completely demolished during the Second World War and reconstructed again by its residents. It was so beautiful for me to learn on the walking tour, that all the buildings in the main square of The Old Town belong to the families of Warsaw's residents who were rebuilding the city after the war.

If you don't want to walk around, you can sit on the bench and listen to Chopin's music entirely for free too.

I can tell you something that was funny to discover in Poland, after recent time spent in Central America. On the map of Warsaw one of the main meeting points is a palm tree.

Palm tree is the meeting place in Warsaw since there is only one in the whole city!

Being there and following the city map, William and I, spent quite a lot of time debating on the possibilities of that tree surviving the Polish winter. William stubbornly wanted to go and touch it, a palm tree that is so important that is on the map, until we've learned that it is artificial.

So yeah, unlike in Mexico City, in the centre of the capital of Poland we have a plastic palm.

Just in case you think that being on our vegetarian/vegan/freegan diets suddenly William and I started to shit money, being jobless and able to do all this travelling...

Polish buses that run between cities, booked in advance are really affordable. Also our secret is that we use all the possibilities of saving money and exchanging goods that there are nowadays.

For example for accommodation in Warsaw we used Couchsurfing. Through this website we've met a young Polish family. Friends we didn't know that we had, until we arrived at their modern apartment where we stayed with them for free.

Another secret of affordable travel is that we hardly eat out, we always take our homemade jars with us.

Interestingly, our Couchsurfing hosts used the word 'słoik' (it means a jar), to describe students or other inhabitants who are eating their grandma's food conserved in jars, in order to save money and be able to continue living in Warsaw .

A bit like what you've told me, until you moved to your grandparents house in Mexico City, you couldn't afford to eat on Fridays. And now you have all this amazing, homemade food of your grandma, which even I truly miss!

Dali, you love music, I would love you to listen to this song about Warsaw,

while there I could hear it in my head all the time:

That's about it for now, tomorrow is flea market again!