I'd like to fulfil the wish which we had in Mexico that we are going to create something together.

I am going to practice my creative writing by sending letters to you.

Also I need to write 'reports' about William's time here, because I know how much you want to hear how our friend is doing in this unknown land for both of you.

To start, I am sorry for the long silence. Journey from Mexico to Poland via Belgium and Germany was, well...I am trying to find a good, polite and positive word.

Yes, you could say that. Entertaining enough!

So here we are. I am back in my parents house in the small, Polish village, Stary Śleszów and William is with me.

As you know, it was William's first time ever on the plane. He continued to be very emotional and excited after we parted with you at Cancun's airport. I don't blame him.

For me it was yet another flight, but for him this journey was a dream coming true!

Have I ever told you how William and I met?

-"You are from Poland? No way! I love Poland! ". Full of enthusiasm he greeted me, on the ecological farm in Nicaragua. Then started telling me about Kraków and his friend there.

Anyway, the strangest thing to me, back then, was that this exotic person, met in the bush of a distant country, wanted to learn my native language- Polish. I was shocked.

But also I was happy to get Spanish lessons in exchange, so we stayed together!

Actually William instantly became my best friend. There was something about William's energy, plus he was so easy going and friendly, he was all I needed then.

It was the beginning of my Nicaragua adventure and I was struggling with many things, I will tell you about it later on. William gave me a feeling of ease and love, he was like a real blessing!!

Now- five months later, we are in Poland. My best friend and I.

We entered Europe in Brussels and we needn't worry so much about paperwork, because we didn't have any problems entering our lovely mainland.

Maybe I should say my lovely mainland, since you are both not familiar with The Old Continent.

You are from Mexico City jungle and William is from Costa Rica, where he has bananas and coconuts growing in his garden and where there is a proper jungle.

The one with heat waves, volcanoes, monkeys, huge spiders, insects looking like something from Avatar and ants the size of European spiders!

Did I tell you that 92% of Polish people are catholic? Wish us luck!

The weather is typical for this end of the world in April. A bit of sun and hail at the same time plus a rainbow.

As you can see in the attached picture, William was very excited to see huge particles of ice coming from the sky and laying on the ground. I hope that this cold didn't kill our strawberry seedlings and small onion bulbs, which we planted yesterday.

My desire for coming back to Poland for the summer and creating my own, vegetable garden has begun! We are here now and we have a huge land space dedicated only for our imagination.

I was in heaven finally working with the soil. I was also so happy when William found spearmint growing under our fence. So there is a little herb garden already that has survived the Polish winter! And apparently last winter was really harsh, some days coming close to -30 degrees Celsius.

It was really funny when finally, after two days of air and land passage, we made it into my family house in Stary Śleszów. William was talking with my father for the first time.

-"When will it start to get warm in Poland?"

-"Now it's warm...!!!" Was my father's (Fred's) rough reply and he looked at William twice and with a profound astonishment.

Well it is around 10 degrees now, so according to my parent the cold season is over.

The very same evening William tried our mirabelle plum and my father had his first mango.

Do you have mirabelle plums in Mexico? I can't remember seeing it there.

Poles say that times are good when we don't have to eat mirabelle with sorrel alone.

Because both are so common, growing everywhere. Like orange, papaya or guava in your part of the universe.

By the way, none of the above fruits grow in Polish climate. Here they are very exotic, available only in the supermarkets.

So not only expensive, but first of all never ripe and fresh. Then, if dried, of course full of chemicals.

I was so happy that the mango which my father had eaten was brought from an old Mexican farmer in San Cristobal's organic market. His produce is dried naturally and tastes absolutely amazing!

Mirabella compote was, as well, natural produce from trees in our garden.

I preserved the jars myself last autumn, without even using any sugar and it at once became William's first love.

Later on the same evening, Fred shared some of his homemade wines with our foreign visitor.

Some are sweet and some are sour. They are made from black currant and of course our little yellow plum.

You can call me crazy, but I am so happy I came back to Poland to live exactly this moment.

For me, it was a really beautiful time in Stary Śleszów !

How is my creative writing? 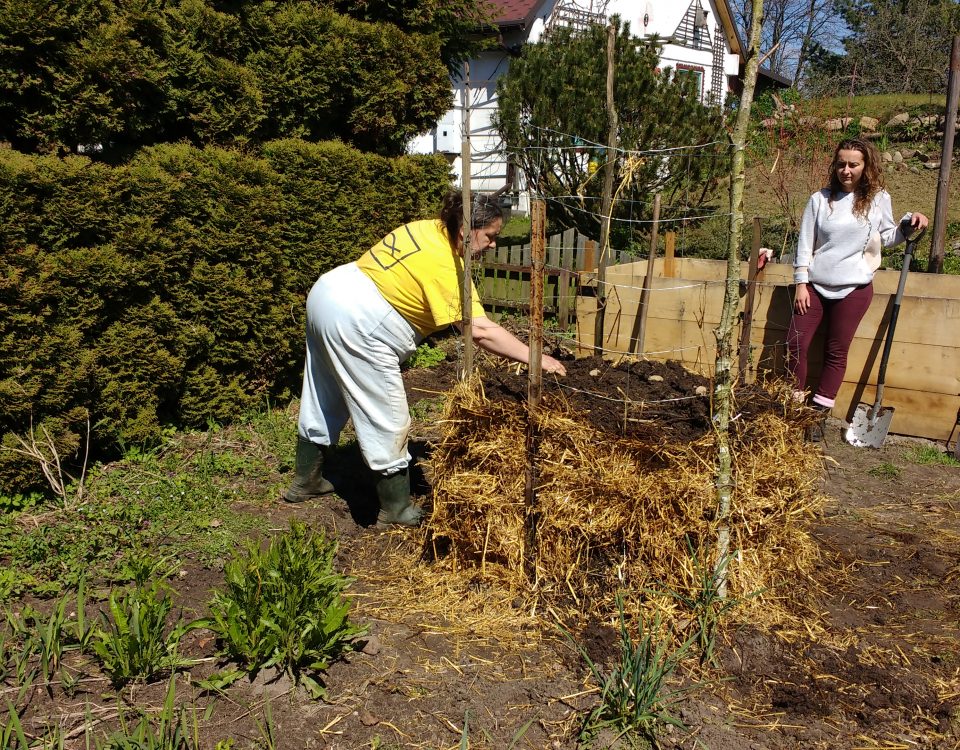